Los Angeles County – Caitlyn Jenner visited the Tenderloin District of San Francisco to meet with community leaders to discuss how to handle the opioid epidemic and how to meet the challenges of the homelessness crisis. Later in the day, Jenner met with the Log Cabin Republicans of San Francisco to encourage voters to vote Yes on Question 1 on the ballot and also laid out her vision to undo all the harm Gavin Newsom has done to California.

CBS 5: “Stop handcuffing the police, restricting them; handcuff the criminals. Enforce our laws and let’s clean this place up.” (WATCH) 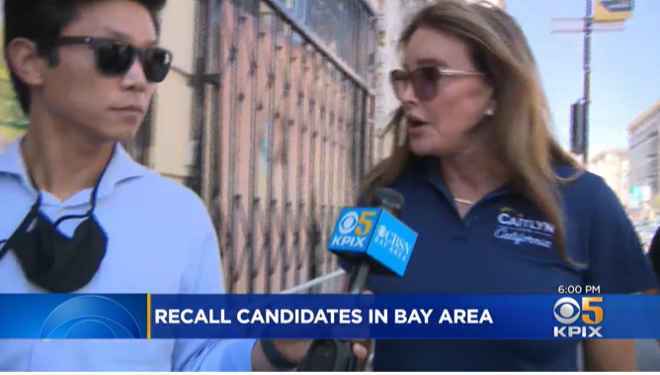 ABC 7: “If you have lower taxes, less regulations, build a pro-business environment. I believe in the people of California, not the people in Sacramento… We need to come up with solutions and we need to do it fast or. to be honest with you, this won't be the Golden State any longer.” (WATCH) 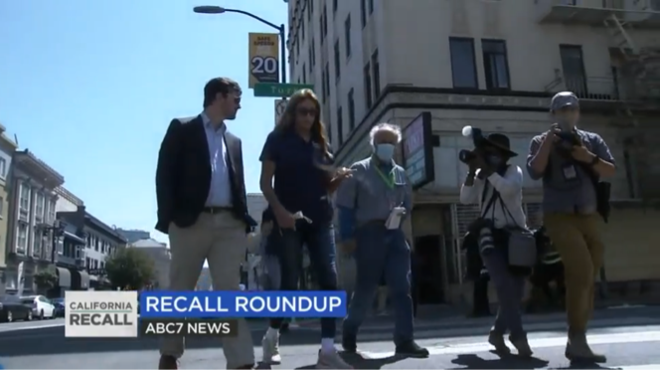 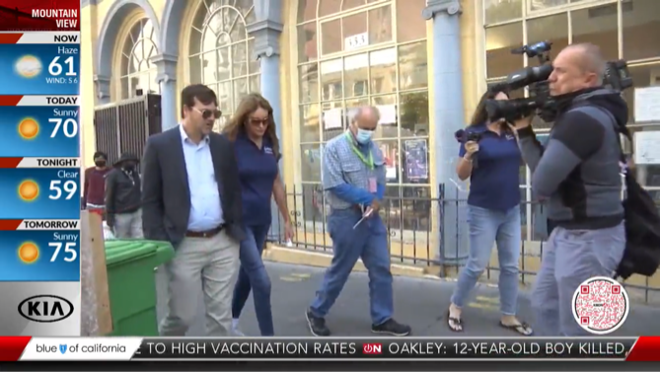 "Philadelphia has taken it upon themselves to dictate Pennsylvanian's lives by mandating businesses require masks or proof of vaccination. It is not up to the government, at any level, to decide how Americans live their lives.


"We’ve seen just how devastating lockdowns and overzealous mandates have been on friends, families, and coworkers. Forcing workers to double mask or be fired is absurd.

"This decision does the exact opposite of encouraging vaccinations, and instead continues to hurt small businesses in Philadelphia which have been through absolute hell this past year due to Governor Wolf and Josh Shapiro's lockdowns. I strongly encourage Philadelphia to change course away from these draconian mandates."

In an incredible display of hypocrisy, the Biden administration has called on OPEC to increase oil production in response to rising gasoline prices, despite having waged all-out war on domestic oil production, specifically targeting Alaska.

“Joe Biden has created an oil crisis in America, and his solution is to give more money, jobs, and power to countries like Iran, Saudi Arabia, and Iraq.  In pursuit of a radical environmental agenda, Biden has continuously assaulted Alaska’s oil and natural gas industry and the thousands of jobs it supports. As a result, he is now forced to beg the oil cartel to increase their production because gas prices are through the roof and inflation is threatening working Americans.

“America’s oil has to come from somewhere, and Biden would rather rely on foreign sources than on our own domestic production. And, as we have seen recently with gas shortages, dependence on foreign oil is a serious national security problem--especially when the oil comes in part from countries that are our foreign enemies.

“Today’s inflation report reaffirms what Republicans have been warning for months. Small businesses nationwide are being forced to bear the burden of the Democrats’ massive government spending agenda in all sectors. Make no mistake – inflation is taxation. With inflation at a 13-year high, this report is yet another indicator that Main Street U.S.A. simply cannot afford the inflation tax that comes with the Democrats' failed economic policies.”

Former President Donald Trump and the Republican Party have refunded nearly $13 million to donors in the first half of the year, after deploying fundraising tactics in the 2020 election that duped donors into giving more money than they intended or believed they were.

the Times reported Saturday that more than $135 million has been refunded to donors by Trump's reelection campaign, the Republican National Committee and their shared accounts in the 2020 cycle through June 2021.

The South Carolina Republican, vaccinated in December, is the first known senator with a breakthrough infection.

Sen. Lindsey O. Graham announced Monday that he has tested positive for the coronavirus, a development that comes after he recently attended GOP and Senate functions without wearing a mask, including a gathering Saturday aboard Sen. Joe Manchin III’s boat.  Graham (R-S.C.), who was vaccinated against the coronavirus in December, said he started experiencing flu-like symptoms Saturday evening and saw the House physician Monday morning. He said he will be isolating for the next 10 days.

Los Angeles County – Caitlyn Jenner for California today announced the start of a statewide bus tour that will begin in Venice on August 12. Jenner will be joined by members of the law enforcement community and neighborhood leaders to discuss the homelessness crisis and the increase in violence due to Gavin Newsom’s failed policies that have hurt all Californians.

“The recall election has been powered by the people of California who are sick and tired of Gavin Newsom ruling like a dictator instead of actually leading the state,” Caitlyn Jenner said. “During the past year, he shut us down while he lived it up at the French Laundry, while the cost of living has made the California Dream almost impossible. It’s his failed policies that has caused the homelessness crisis to explode and created an environment where violence has worsened in our communities.”

The bus tour will take Jenner across California to meet with voters, hold roundtables with business and community leaders, and talk to local media about her plans to undo the misery Newsom has brought to California and to fight one-party rule in Sacramento. More dates and event details will be released in the near future.

Douglass’ argument was unassailable in 1852 and, even long after the Emancipation Proclamation and the 1964 Civil Rights Act, white supremacy and structural racism still undeniably inflict “gross injustice and cruelty” against Black people. And no reparations were ever paid for the hundreds of years of chattel slavery, the impacts of which are still felt by Black communities today.  HR 40 has been introduced in every congressional session since 1989. Passing this rudimentary — yet necessary — bill for a commission to seriously evaluate a plan for material reparations is long overdue. We’ve had our fill of symbolic “victories” and “conversations” about race. It is time for action.

Sen. Roger Marshall on Wednesday called on the Department of Justice to investigate whether ESPN played a role in the latest conference realignment affecting the Big 12 football. conference.

“I write today to ask that the DOJ investigate ESPN’s role in the potential destruction of the Big XII Conference and if any anti-competitive or illegal behavior occurred relating to manipulating the conference change or ESPN’s contractual television rights,” the Kansas Republican said in a letter to Attorney General Merrick Garland.

A key Senate committee voted on Wednesday to repeal two authorizations for the use of military force against Iraq, setting up a full chamber vote later this year.

All Democrats and three Republicans on the Senate Foreign Relations Committee backed a bipartisan bill to scrap the 1991 authorization for the Gulf War and the 2002 authorization to topple Saddam Hussein’s regime in Baghdad. Both conflicts are effectively over, and U.S. troops remain in Iraq only under invitation from the government to provide security assistance and conduct counterterrorism operations.

President Joe Biden announced on Tuesday that the United States is projected to reach the mark of 160 million fully vaccinated Americans by the end of this week and that his administration will engage in targeted outreach to get more people vaccinated, after the nation fell short of his initial July Fourth goals.  Biden outlined five key areas his administration is focused on as it works to get more Americans vaccinated and protect the population against the highly transmissible Delta variant.

The Defense Department on Wednesday identified the police officer who was killed in an attack outside the Pentagon on Tuesday as George Gonzalez, an Army veteran and member of the Pentagon Force Protection Agency.

The fatal incident began around 10:40 on Tuesday, when an individual exited a bus at the transit center just outside the Pentagon and, without provocation, attacked Gonzalez with a knife, the FBI said Wednesday. In the ensuing struggle, the attacker "mortally wounded" Gonzalez and then shot himself with the police officer's service weapon, according to the bureau.

The court, by a conservative-majority 6-3 vote, reversed a lower court ruling in deciding that Arizona’s regulations on who can return early ballots for another person and for the state’s refusal to count ballots cast in the wrong precinct are not racially discriminatory.

Making clear he intends to continue to fight in court to prevent their release, lawyers for Trump rejected a recent Justice Department determination that lawmakers are entitled to the documents.

Chaos and confusion: Back to school turns ugly as Delta rages

Chaos and confusion: Back to school turns ugly as Delta rages

School boards are at war with governors over masks. Superintendents are developing contingency plans on the fly. And schools that only just opened have had to shut down.

Welcome to sophomore year for Covid-19. The Delta variant, which few had heard of when classes ended in the spring, is upending reopening plans across the country, threatening President Joe Biden’s promise of a more normal school year and sustained economic recovery.

Nearly 18 months into the pandemic, there’s no consensus on how to keep students and staff safe. Local school leaders, whipsawed by changing federal guidance, find themselves building a patchwork of protections based as much on local politics as public health.